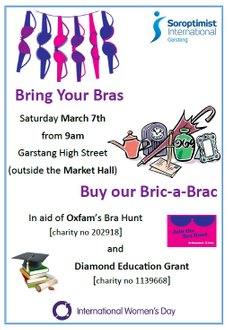 Bric-a-brac Stall and The Bra Hunt

Last month I wrote about this campaign so this is just a memory jog to please bring your unwanted bras to our stall, Sat 7th March outside the Market Hall, High Street, Garstang, remember any condition will do!

Not just a Soroptimist Day

We have chosen this date to launch our campaign for its proximity to International Women’s Day on the 8th March. A date celebrated by many women’s groups worldwide.

Space is limited here but I will try to give a little history of the origins of this important day.

1909 Started in the USA when women workers went on strike to protest against poor working conditions.

1910 At a conference in Copenhagen of over 100 women from 17 countries established a Women’s Day, international in character, to honour the movement for women’s rights and to build support for achieving universal suffrage for women.

1911 As a result of the Copenhagen initiative, I.W’s.D. was marked in Austria, Denmark, Germany and Switzerland, where more than one million women and men attended rallies; demanding women’s rights to – hold public office; vocational training; and an end to job discrimination.

1913-1914 As part of the peace movement I.W's.D., became a mechanism for protesting World War I. - Russian women observed their first International Women's Day, - in Europe, on 8th March, women held rallies to protest the war.

1917 Women in Russia again chose to protest and strike for 'Bread and Peace' on the 8th March. Four days later, the Czar abdicated and the provisional Government granted women the right to vote.

The United Nations and Gender Equality – signed in 1945, this charter was the first international agreement to affirm the principle of equality between women and men.

Emma Watson (Harry Potter star) at The UN today - Google ‘History of International Women’s Day’ scroll to the bottom and listen to Emma’s inspiring speech at the U.N.

Looking forward to chatting with many of you on the 7th March or contact us through our web site or visit our Facebook or Twitter page.